For years perverts have been putting special lenses on their infrared cameras and taking “X-Ray” pictures that turn out looking like garbage.  But now new cell phones will have a chip that will actually see through stuff, including my clothes!  Holy Crap!

Google “cellular phones x-ray chip” and you’ll see that I’m not making this up.   Basically, the gobbledegook science behind it is that it uses the ‘terahertz’ spectrum which is a light spectrum between infrared and microwaves, and the shit can see through walls, wood, plastic and my underwear! 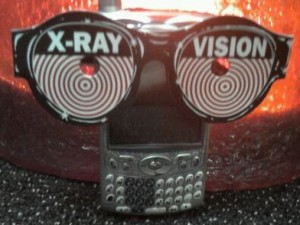 Now don’t get me wrong, if I like you, I’ll show you what’s beneath my underwear, but we have to get along well first.  I at least want dinner  When I’m out jogging or shopping I don’t want my goods being flashed on someone’s cellular phone and messaged to their buddies or posted on the internet.

I suppose it might have it’s benefits for dating, let’s just say to know if I’m working with a “shower or a grower” right off that bat.  It could also prove helpful around Christmas time too.  And if Cracker Jacks still made prizes worth a Damn, someone could really score.

Now I’m not sure if I’m going to break out my VISA card right away purchase the latest Superman enabled phone.  But I know that plenty of people will, so I have to be prepared.

I wonder if I can get a sexy lead bra and panties at Victoria’s Secrets?