The Difference Between Intuit Turbo Tax Free versus Freedom versus Deluxe

When Spambots are Extra Nasty!

Cop Thomas Griffin Got Away with Murdering Cisco the Dog

It’s been almost a year since Austin Police Department Cop murdered the gentle 50 pound Australian Cattle Dog named Cisco.  The outrage is over, the news stories have stopped, the Facebook page is silent, the Justice for Cisco website is “under construction” and the authorities have declared that Thomas Griffin and the APD will suffer no consequences at all for Grffin’s unconscionable behavior.

Thomas Griffin faced no criminal charges and no civil liability and he is free to murder again.  He didn’t even have to stand trial.

If you missed the story (or have forgotten it), I can summarize it for you with 100% accuracy because the 911 recording and the police dash-cam video of the murder leave nothing to speculation.  I’ve included the links below so you check them out too.

On April 14, 2012 a busybody named Tiffany was driving around and called 911 to report an Unarmed Hispanic male with salt and pepper hair in a navy shirt was “coming after” his girlfriend.  Tiffany got bored less than a minute into the call and hung up, but then 911 called her back and by then she couldn’t be bothered to give them the correct address.

Cop Thomas Griffin showed up (at the wrong house) and when Michael Paxton, a white male, with dark hair in a white shirt came out, Griffin  pulled a gun on him and ordered him to show his hands.   Two seconds after he ordered Paxton to “show his hands” he then yelled “Get your dog,” and 1/4th of a second later he shot and killed Cisco.  Cisco was did not jump at him or touch him at all.

Before we continue, I want to make it VERY FUCKING CLEAR that when I wrote, “two seconds after he ordered Paxton to show his hands” I meant TWO FUCKING SECONDS.  And when I said “1/4th of a second after he yelled, ‘Get your dog’ he shot Cisco, I meant that too.  Watch the video from the dash-cam (below) and you’ll see that  at 14 seconds he yells, “Show me your hands” and at 16 seconds he yells “Get your dog!” and 1/4th of a second after that he murders Cisco.  I am not exaggerating.  He gave Paxton 1/4th of a second to comply with his conflicting orders before murdering the man’s dog.

ONE FOURTH OF A FUCKING SECOND.  Probably less time than it took you to read it.  This was 17 seconds after he pulled up to the house! 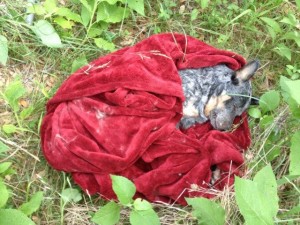 To sum is up, the cop was at the wrong address,  completely forgot the description of the suspect, drew his gun on an unarmed man who was complying with his commands, and then shot his non-threatening dog 1/4th of a second after commanding the man (who he’d just told less than 2 seconds earlier to show his hands) to “Get your dog!” 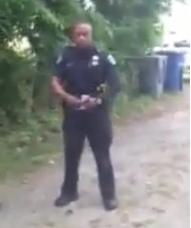 But it got worse.  Then Thomas Griffin berated Paxton and shouted at him that it was his fault it happened, because he should have had his dog on a leash.  Cisco was IN HIS FUCKING BACKYARD AT HIS HOUSE!!!

When Grffin’s supervisor arrived he lied about the events; he said he had been going door to door listening (when he actually killed Cisco 17 seconds after he pulled up) and told her the dog was lunging at him and was going to bite him.  And several times he referred to shooting Cisco as “popping” him, showing absolutely no remorse or respect.  The guy is incompetent, brutal, stupid and an asshole.

So what’s the bottom line today, 10 months later?  The public has forgotten, the corrupt Austin Police Department let it drop, and the justice system completely failed Cisco.  It’s over.  There were no consequences for the cop or the police.  Nothing will change at all.

So if you live in Austin Texas (and likely some other jurisdictions too), think about how the police can come to your home and kill your pets at any time.   Hell, they may even send Thomas Griffin to do it.   And a year later, nobody will even remember or care.

No Justice for Cisco.

One of the better news articles: http://www.nydailynews.com/news/national/austin-police-chief-calls-radio-show-apologizes-man-dog-shot-responding-wrong-house-article-1.1063552