If you deal with any large company in America, you are most likely stuck with Binding Arbitration.  This means if you want to sue them, you’re going to wind up in a Kangaroo Court that rules in favor of the crooked company over 99.6% of the time.  But Binding Arbitration in the Terms of Service (TOS) of the companies that you’re forced to deal with is old news.

However, it just got much Fucking worse.

In a Nutshell, the Supreme Court decided that crooked companies may include a clause like this in their TOS:  “Arbitrator.  The claim or dispute shall be resolved by a single arbitrator selected and agreed upon by the parties.”   This means that you give up your Constitutional right to a real court hearing and agree that any Beef you have will be decided in a fake court hired by the Giant-Monster-Company (GMC) that has cheated you.  All of the Binding Arbitration companies are crooked, and 99.6% of the time they “rule” in favor of the GMC that hired them.  (And those few that might have once been fair were fired and went out of business.)

This clause also means there can be no Class Action lawsuits either. 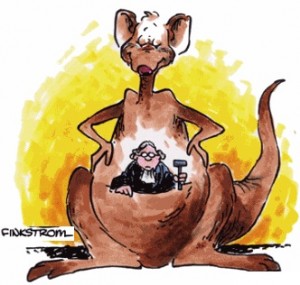 In theory Binding Arbitration helps keep down costs for everyone, helps the courts stay unclogged and provides speedy justice.  In practice, it just means the Consumer gets crushed.

But this is all old news — here’s the Bombshell I promised.

Verbiage like this has been showing up in GMC’s TOS in the last year, “Costs and Fees.  Each party shall bear its own costs of discovery, deposition, attorney and witness fees but the arbitrator shall be empowered to make a different allocation of such fees and costs in the award/”

Everyone pays their own fees seems innocent enough, right?  But notice that the arbitrator is now empowered to “make a different allocation.”  That means the Kangaroo Court can now say, “You lose  plus you also have to pay all of the legal fees of Giant-Monster-Company too.  Hahahahaha!    You Are Screwed!”

Guess what?  This last year, that’s Exactly what they’ve all been saying.  People are being cheated by banks, cable companies, phone companies, etc. and when they take it to the Kangaroo court, not only do they lose, but they’re stock with massive legal fees as a penalty for their effort.

But it’s worse.  In that .less than half of 1% where the consumer wins, the Kangaroo courts have started declaring that the victim STILL has to pay the Giant-Monster-Company’s legal fees.  So even if you Win, you Lose.

How does this come into play?  Take my recent article on Time Warner Cable’s internet price hike http://readthisshit.com/time-warner-cable/ where they claim their crooked price increase is “just an equipment fee.”  There can’t be a class action, if you do submit to Binding Arbitration there is a 99.6% chance you’ll lose, and win or lose, it likely you’ll be hiit with paying Time Warner Cable’s “legal fees” too!

The Supreme Court gave away our rights, and it’s getting worse.