Let me begin by saying that this didn’t happen to readthisshit.com — Google Adsense banned this website from Day #1 because it has “Shit” in the domain name and they claimed that it offended their sensibilities.  (Of course Google promotes plenty of Vulgar content, but they’re hypocrites like that.)

But, this has happened to countless website publishers, and it happened to my friend Brielle.  She asked me to share her story to warn others.

Google runs an advertising program called Adwords where they sell banner ads and links if you want to  advertise your business, product or website.  Someone who wants to advertise can pay Google a couple of dollars per click through Adwords and then Google gets Suckers to place these ads on their websites with a program called Adsense, and tells them they will get a few cents per click.

Google gets $2 a click, Sucker gets 4 cents a click, and Google calls it square.  (Of course all the tracking is built into Adsense, so they’re probably lying about the number of clicks, but what the Hell, we won’t even go there.) 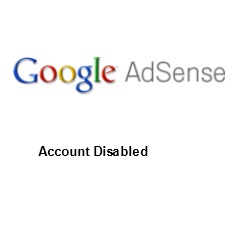 Kind of a raw deal for the publisher, but some people figure 4 cents is better than nothing and sign on.  Except as one-sided as it sounds, Google doesn’t even want to pay the 4 cents.

Google’s Terms of Service say that they won’t pay any money to a new person hosting ads for them until they earn $100 in revenue.  Less than 1% of the people who see an ad click, especially with many of the cheesy ads Google runs like for adult diapers, catheters, free credit reports that cost $25, etc.  So to earn $100 at 4 cents a click, one needs about 2500 clicks.  And with less than 1% of people clicking a webmaster needs about 250,000 visitors before they’d get paid even 1 cent by Google.

(Some clicks are worth more, some less and the percentage is sometimes higher or lower than 1% – but this is about average.)

250,000 visitors before Google will pay a Penny.  Think about that a moment.  This isn’t even the controversial part!

Brielle’s Blog was new and nobody was banging down her door to advertise, so she figured she’d go for it.

In April she showed Google’s ads a few thousands times and “made” $2.12 and Google paid her $0

And then in May she showed their ads a few thousand more times and earned $3.14  : Google paid her $0

June she did even better and finished at $5.86 but Google paid her $0

July she doubled her traffic and showed thousands and thousands of ads served for Google and a revenue of  $12.11

Her Blog was clearly picking up steam, she was up to $64.10 and figured probably by the end of the year she’d finally get paid.

But then in October, something very cool happened, one of her articles went Viral and she got thousands of hits and made $78.34 in revenue, bringing her total to  $142.44 and she was  ecstatic!  She’d finally get paid for 6 months of displaying over 300,000 ads for Google.

She got an end-of-month notice saying not to count her chickens just yet, that the clicks had to be reviewed for fraud before she’d be paid.

Then there was another notice from Google saying that her results were verified and she would get her first check for $142.44 issued at the end of November (no typo, Google doesn’t pay until the following month, when they do eventually pay).

Still, she’d been waiting since April and hadn’t seen a Penny from Google for 300,000 plus ads she had displayed, so a few more weeks seemed OK.

And her traffic in November was doing pretty well too, not like the Viral month of October, but she had about $40 more that’d be coming  to her soon.  Or so she thought.

Three days before the check for $142.44 was supposed to be sent Google deactivated her account and announced that they were keeping all of the advertising money she had earned going back 7 months.

What’s really sad about this is that I did some investigating (using Google!) and there are virtually unlimited number of stories about people who have been cheated by Adsense.  I had seen some of these before when I was researching advertising for readthisshit.com but I thought to myself, “I bet those people clicked their ads” or cheated in some other way.

To be fair to Google, I bet some of them did try to game the system.

But Brielle was honest and they stole 7 months of her work and Google did nothing to justify it except sending her a form letter and then stonewalling her by refusing to communicate in any way.   And you can bet that the majority of the stories that you read about are victims just like she was.

To sum it up, the way Google’s Scam works is they trick publishers into running ads for them for months without paying for them, and everything is fine.  But right before they’re supposed to send out the very first check, they disable the publisher’s account and then steal the money.  Rinse and Repeat and Google gets Billions of ads served without paying a cent for them.