readthisshit.com is now on Alltop! Yay!!!

What’s with the guys in jeeps?

I have to put some effort into keeping my girlish figure, so you’ll find me out running on most days when it’s not raining.  So I have to throw out the question in the title, “What’s with the guys in Jeeps?”

When I’ve got a sweat worked up, a nod or a wave with that “I’m workin’ it too look”  from someone else running or on a bicycle gives us both some encouragement to keep it going.  But if you’re in a Jeep, WTF is up with that?  It creeps me out.  Plus (please don’t think I’m a Bitch), you don’t get to give that look unless you’re putting in some physical effort too. 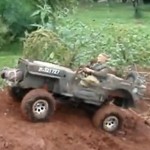 It’s like guys in Jeeps (sorry men, woman just don’t do it) think that because they’re in a freakin’ Jeep that counts like they were running or cycling?  Sorry Dude, you don’t get to participate in the sporty exhange unless you park the Jeep and get your lazy-Jeep-ass out of the vehicle and closer to the pavement.

You don’t see people in cars doing that shit, so what do the Jeepers think is the difference between them and someone in a car, truck or van?

Now I know the Jeepers wave to each other, the way that the guys who own Porsches are in that Porsche-Wave-Club, but I am totally fine with that because it doesn’t involve me.  Carry on with that if it floats your boat.

Alright, you’ve been warned now!  If you see me, get out of your Jeep, then wave to me.  Or catch me when you’re cycling. 😉