Price Gouging after Sandy is Essential and NJ Officials are Idiots!

Paypal plans to SCAM to you this holiday season!

I had meant to get to this sooner, but with all of the recent news events, it moved to the back of my head.  But I want to address it now.

The USADA released a 1,000-page report which details the case against Lance Armstrong that shows what it calls “conclusive and undeniable proof that brings to the light of day for the first time this systemic, sustained and highly professionalized team-run doping conspiracy.”

So Lance Armstrong is a Doper, a Fraud and a Cheat.  And he’s being stripped of all of the first place awards and all of promotional contracts. 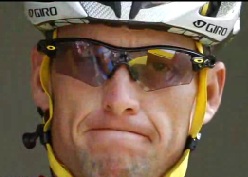 But here’s my big beef.  He stole the Tour de France first place from seven people who would have won if he hadn’t cheated.  They won, he didn’t.  .When I thought about doing this article, I thought I would list their names, BUT AFTER LOOKING, I COULDN’T EVEN FIND THEM!  Second place isn’t even important enough to note.

Those seven people are entitled to first place awards, first place money and first place contracts — or at least the money they would have earned.  And that money needs to come out of Lance Armstrong’s hide..

Tour de France Race director Christian Prudhomme wants the money for his pockets, “We hope that there is no winner in these editions,” he said. “A formal decision must be taken by the UCI but for us, very clearly, there must be a blank record.”  Nice Prudhomme, the second place winners had the prize money stolen from them once, you want to take it from Armstrong and steal it from them AGAIN?  You should be Fucking “stripped” too.

At $700k for each Tour de France he stole, we’re talking.about FIVE MILLION DOLLARS + interest, that Armstrong should have to pay to the 2nd place winners instead of this money going to Christian Prudhomme’s next summer house.

But from the look of it, these 7 First Place winners aren’t going to get Shit beyond their original 2nd place awards.  They won and they’re treated like losers.

And that sucks a lot.