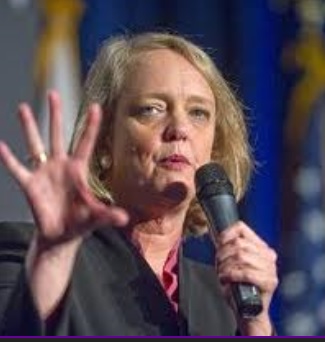 Apparently stealing BILLIONS from Ebay sellers and trashing the company isn’t enough for her, so now she’s destroying the computer manufacturer HP and getting another $1.5 million for her efforts!

This week HP announced Whitman is slashing 34,000 jobs.   But somehow she is  entitled to a $1,500,000 bonus?  This damned Bitch should be imprisoned for what she’s done to hardworking people, but instead she’s made a career out of bleeding large companies dry and then moving on.

When she lost the California Gubernatorial race (and wasted $140,000,000 stolen from Ebay sellers) in 2010 I’m sure a lot of people breathed a sigh of relief.  But you can bet this DAMNED BITCH will try again and with all the money she’s taken away from the people who earned it.

Eventually she’ll be President and then we’ll really suffer!

And some related shit:

Why the Hell would anyone still use Ebay?