No welfare pot for the moochers?

“Hey Babe, spare $50,000?”  Maybe the bums aren’t so demanding on the street, but the lifetime welfare recipients sure have a lot of gall.   In most states, they can use the handout to buy pretty much anything.  And some of them breed like roaches and get a handful of cards that are supposed to be used for their kids, but they spend the money on crap.

I just learned that in Washington that it’s legal for EBT holders to use their cards to buy weed, but 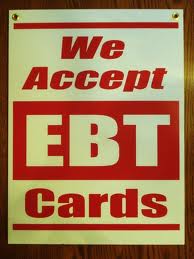 that they’re working on fixing it.  WHAT THE FUCK?    I don’t have anything against pot, but how the Hell was it not automatically excluded already?

Here’s my fix.  Instead of saying, it takes new laws passed by the senate to outlaw every single fucking thing that CAN’T be bought with these cards, how about just say what CAN be bought.

If you want cheese, sugar, pancakes, ice cream or anything else, then get a job!