I Can Text Safely While Driving

But let’s begin by looking as Reed Hastings, Netflix’s CEO, who you can call the Norm these days.  Last year he ran Netflix into the ground, destroying the company and stock value.  Every decision he made was a bad one.  Yet he “earned” 9.3 MILLION dollars in salary and benefits.  That’s approximately 200 times the salary of a US teacher who made an average $44k .

Perhaps an extraordinary person is worth an insane amount of money.  But Reed Hastings was a failure.  He trashed Netflix which means the value he brought to them was worth less than Zero.  Yet he managed to snake them out of 200 times the salary of an average teacher?

I could make a list that goes on and on with people who were failures and destroyed the companies they worked for, yet most walked away with Millions and Some took Billions.  The companies are gone, the people who had jobs are unemployed and the rich CEOs are working someplace else now.

Meg Whitman drove Ebay into the ground and walked away with a couple Billion dollars.  AIG President Martin Sullivan destroyed the company to such an extent that it needed a Government bailout and his Golden Parachute was $47 million dollars (as he was Leaving, he got a BONUS of $47million).  He caused the biggest insurance failure in the history of the world, yet he walked away wealthy beyond most people’s wildest dreams.

I mentioned these real life examples of failures and crooks who were paid a fortune to make the indisputable point that there was nothing extraordinary about these people.  In fact, the opposite was true: Because they were there, these companies were much worse off than they would have been without them. 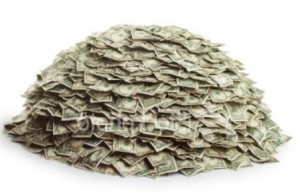 But when I thought about writing this Blog, pointing out the huge failures wasn’t my main intention.  I’d like to concede that there are some people who are worth crazy amounts of money.   But the question is, how much is Crazy and how much is Beyond Crazy?

Let me make it clear, I think Charlie Sheen is a Bigoted Asshole, I don’t like him, and I hope when he dies he Rots in Hell.  But that aside, I know that he brought significant value to the show and it’s ability to sell advertising (until the end when his behavior became a liability).

But 11,000 times?  Come on now.  How can anyone say that this man should earn more than a teacher will earn in their entire lifetime for one week of  Screwing around on a TV set?

Don’t even get me started on professional athletes and the obscene amount of money that they make for Playing Fucking Games.

I’m not a Communist, Socialist or Marxist.  I don’t think that everyone should make the same amount of money.  It’s common sense to state that a Garbage Man shouldn’t make the same money that a Neurologist pulls in.

But when people are taking thousands and thousands of times the money other people are getting, it destroys society.  The rich people buy all the land, the stock, the precious metals — they take everything from everyone else.  And this leaves many people without food or homes or jobs.  There is a limited amount of everything and the ultra-rich hurt society by hogging it all and manipulating all of the markets.