Who doesn’t want $60 for $30?  That’s free money.  It’s better than going out on a date, because this way I don’t have to put out.  But damned if any of the Groupons I did turned out like that.

Hey, that sounds like my Groupon PoopOn post from June 1st!  And if you want to read some of my personal experiences with Groupon, check out that link.

But the reason I wanted to revisit Groupon this fine Friday, is I was just reading about some of the Business Perspectives that small owners have shared about their Groupon experiences.  You can do some Googling yourself, for specifics, but there are a bunch of  reoccurring themes. 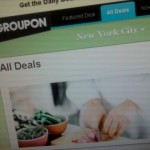 There are some other things that seem to crop up in specific cases, but 1-5 seemed to be happening over and over again in the articles that I read.

Since I began this whole blogging thing with my Groupon-Poopon artcile, I felt compelled to write this follow-up when I became aware of what a lousy experience this seems like from the small business side too.

So if the consumers get Screwed, and the small business gets Screwed — I guess it’s just Groupon that’s getting a sweet deal?