I Can Text Safely While Driving

Pay your way into a Political fundraising dinner for $35,000 and feel like a Big Shot and “support your party.”  I get that.  I think it’s a self-indulgent waste of money, and if you have that much money to throw away on Crap like a Political dinner, you’re a crook.  But that’s another story.

But $1693.44 for dinner at a Sushi restaurant?  That’s what I’m talking about today.  And in this case, this was without Saki!

At Yelp.com, Jeff. P posted this picture of his tab from Urasawa, a Sushi place in Beverly Hills. 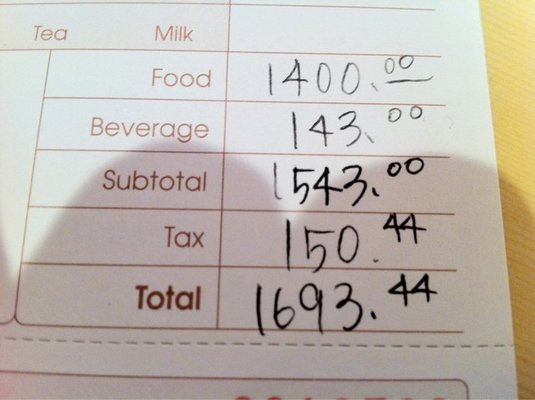 Now if you want to read more about this place, you can check out Yelp.com (I’m not going to direct link to them, I think it’s shameful.)   And No, Yelp.com, it wasn’t lost on me that you were paid to delete every bad rating the place has, leaving only 4 or 5 star ratings.  Or are we supposed to believe that over 300 people posted reviews in the last year and absolutely none of them had less than a “4 Star” time?

So the deal with this snobby-ass place is there is only one seating a night, the dinner takes about 4 hours, and each day they “sand down the table” to make it fresh for that night’s seating.  Apparently the rich are too good to have to eat on a table that might just be washed down, or to eat on a tablecloth.

Now I ran with $1693.44 because we have the receipt, but other Snobbish Assholes have Bragged in the reviews that they spent $600 or $700 Per Person for their dinners.  I suppose they were even more piggish than Jeff P. and also had some expensive drinks.

Now why do I find this SO FUCKING OFFENSIVE?  Because if people can waste $1693.44 on dinner, they have too much money.  I’m not saying people don’t deserve the money they’ve earned or inherited.  But if you have the money to burn like that, then you have too much money.  Period.  As long as there are people who don’t have money to eat ANYTHING, there shouldn’t be people spending 150 times what it costs to go to McDonald’s.